Renovation and reconstruction of The Fountains walking trail along Raintree Drive is nearing completion of Phase 2. Removal of the deteriorated trail is complete, and our newly contoured walkway will be
poured today and possibly one more day, weather permitting. Homeowners are welcome to observe from the safety of the City sidewalk along Raintree Drive after 10AM.

Phase 3 (Final) landscaping and drainage improvements will commence as soon as the walkway construction is completed.

The drainage correction at the pond gazebo trail is underway. 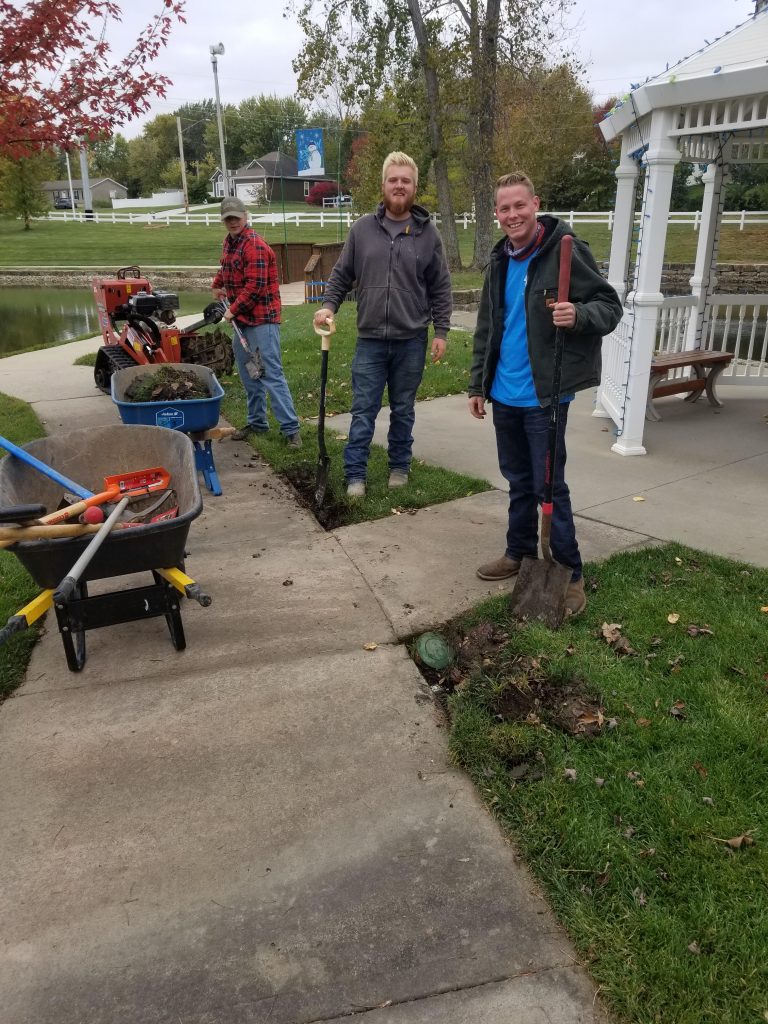 We will have Reisner’s truck to place debris. We plan to start at 9 am at the cul- de- sac fountain. Lawn bags will be provided. Bring any tools you have to help with cutting & hauling.

We also need a small row boat to navigate to the island pond. Even if you can’t participate but are willing to lend your boat, it would be appreciated.

Irrigation is going back to two times per week, based on current lawn conditions and cooler weather forecast for next week. Homeowners will be watered on Monday or Tuesday, and Friday or Saturday.

Mowing will continue weekly through October, or until freeze.

Homeowners volunteer cleanup is set for the third week of October, details will be announced next week.

The HOA scheduled Fall pre-winter lawn and grounds final cleanup will be scheduled when most leaves have fallen, probably late November or early December.

Grass carp were introduced into The Fountains ponds following the 2017 retention pond dredging. They help keep the ponds clean by controlling invasive grasses.

Below is a photo of one of our healthy carp, now approximately 3-feet in length. The Board is accepting suggestions for naming him/her. 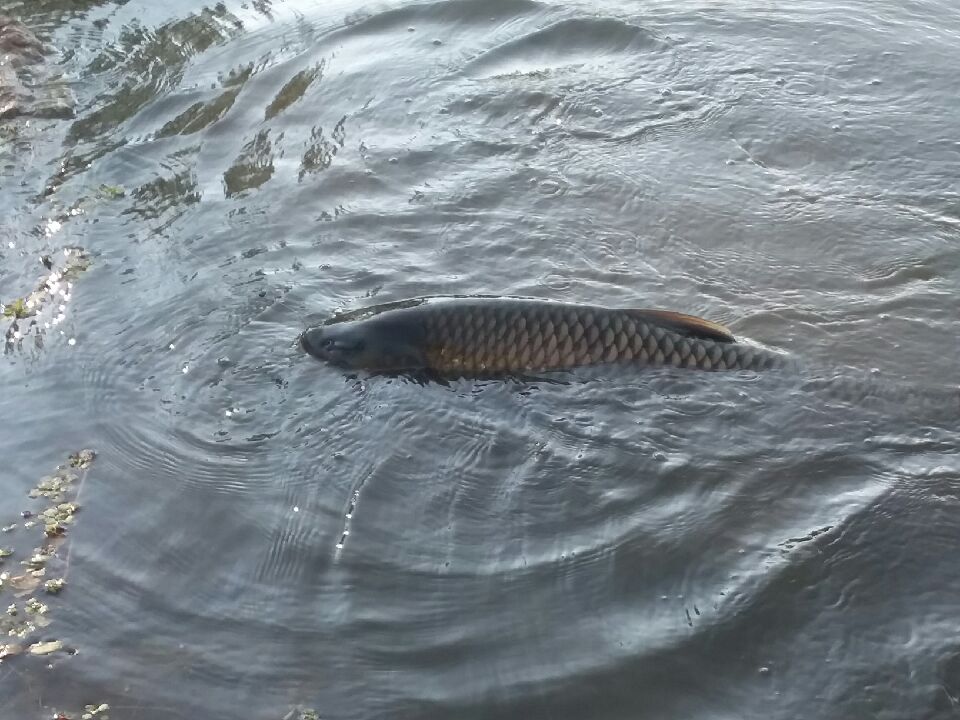 The Estates fountain renovation is done. The contractor did a nice job of cosmetic patching of several existing cracks in the bowl. His estimate is a 90% reduction of leaks, with multiple coats applied. The
coatings are hardened, and the fountain is being re-filled for operation.

Our goal to stabilize the existing fountain in a cost effective manner has been achieved, giving us time to further develop plans for the costly replacement of the structure.

The attached before and after photos are for reference. One of the significant cracks is shown in photo one, above the photographers shadow. 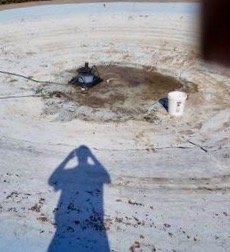 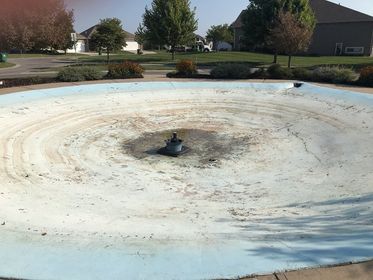 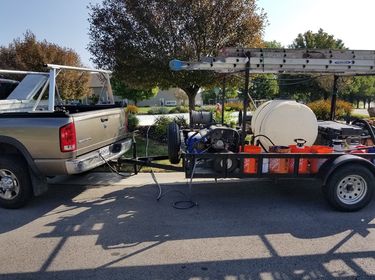 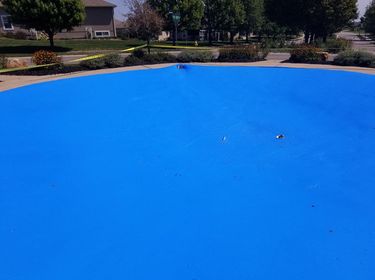 Homeowners were asked to consider replacement of the deteriorated fountain in our HOA survey earlier this year, at a projected cost of $74,800.00. Your HOA has seen little enthusiasm for undertaking such an expensive project, and there is still no consensus on exactly what an acceptable replacement fountain would look like.

The Board has received input from a number of homeowners, suggesting a less extensive renovation of the fountain would extend its life and postpone replacement until a design process led by residents has time to meet and develop options.

The Board has accepted a bid to drain, power clean, patch, and seal the fountain with a commercial epoxy for $3,500.00. It will be re-painted a deep royal blue. The work may take a week to complete, if weather allows. Board member Margarite Hill will supervise the work.

Homeowners should note your Board is working hard to accomplish capital repairs in the most reasonable and cost effective manner. No special assessment is required for this revised project. 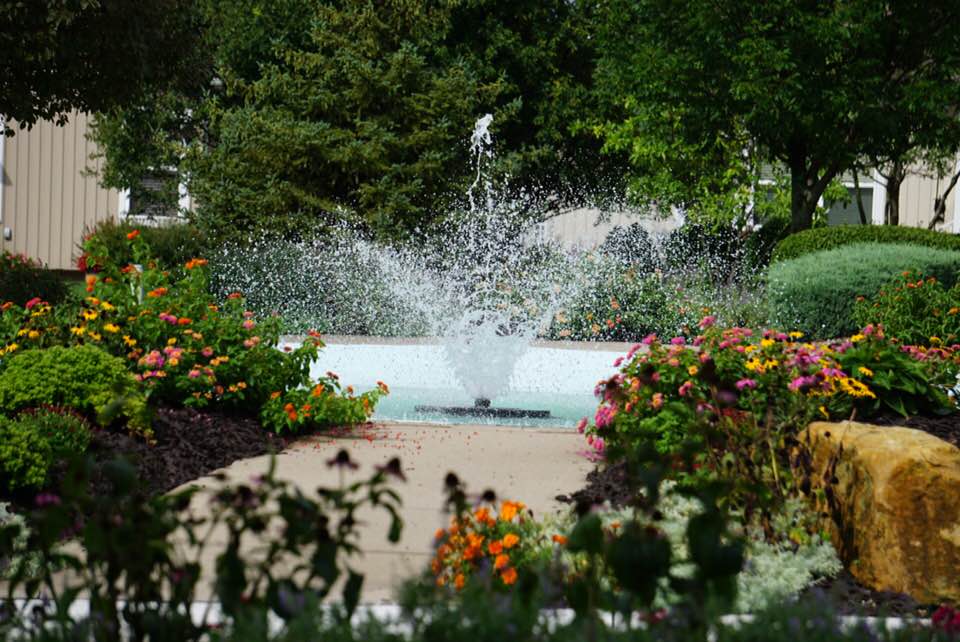 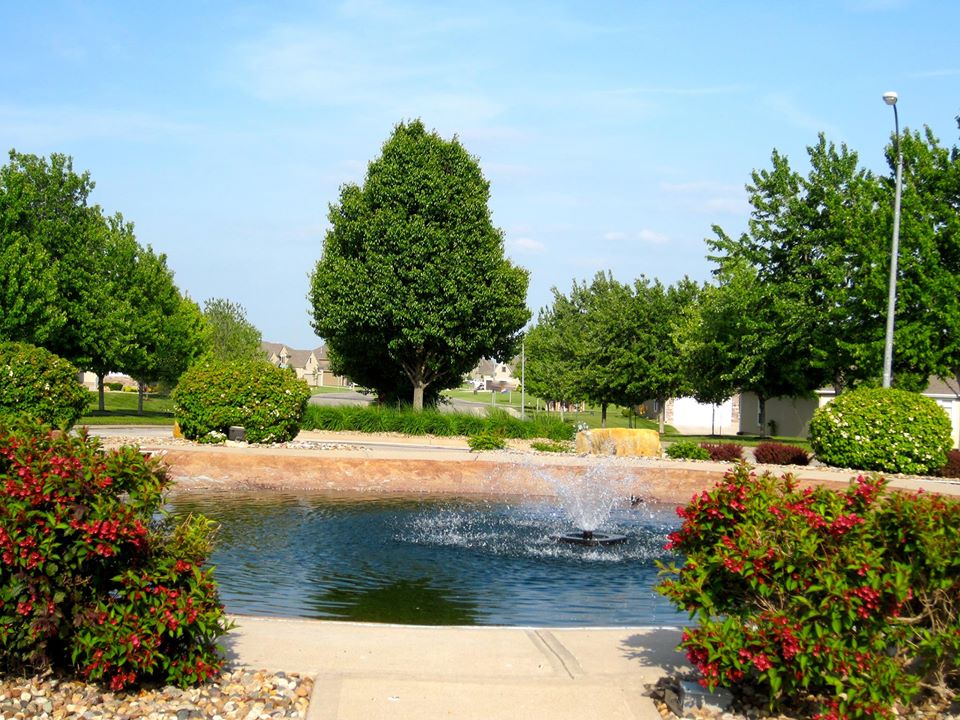 The Fountains at Raintree
Homeowners Survey Results
May 28, 2020

The results of the May survey requesting homeowners to prioritize infrastructure repair projects are presented below. There was a slight delay to incorporate late responses. 120 homeowners responded. Not every response ranked all items.

There were 11 “No” votes on all projects.

Fifteen homeowners responded with written remarks, which will be summarized for discussion at our Annual Meeting.

A detailed three-step project plan for walking trail repairs with pricing will be presented to the membership at the Annual Meeting. The presentation will include alternatives for funding.

Your Board appreciates the thoughtful responses and everyone’s participation in helping guide our infrastructure repair expenditures.

This month’s Survey from your Board includes four discrete capital projects that need to be done in the near future.  The information below provides a summary of the issue with our pond.

Our main pond has not been dredged since The Fountains was established. The original small farm pond was enlarged and lined by our developer before 2008. It now contains 12+ years of siltation nearly filling the original 10+ foot depth of our pond.

We are required to maintain the unobstructed flow of water through our pond, as part of the Missouri Conservation Department’s drainage plan. Our pond water also flows into Raintree Lake, which has an interest in our pond not contributing to their siltation issues.  Siltation (deposits of dirt and debris from storm runoff) is an ongoing issue.  Raintree RLPOA deals with siltation at Raintree Lake. Their annual budget for siltation abatement and dredging this year is $226,400.

Enclosed is a current depth mapping of our pond. The average depth is less than 2.5-feet, filled with siltation from the original installed drain depth of 10+feet depth. 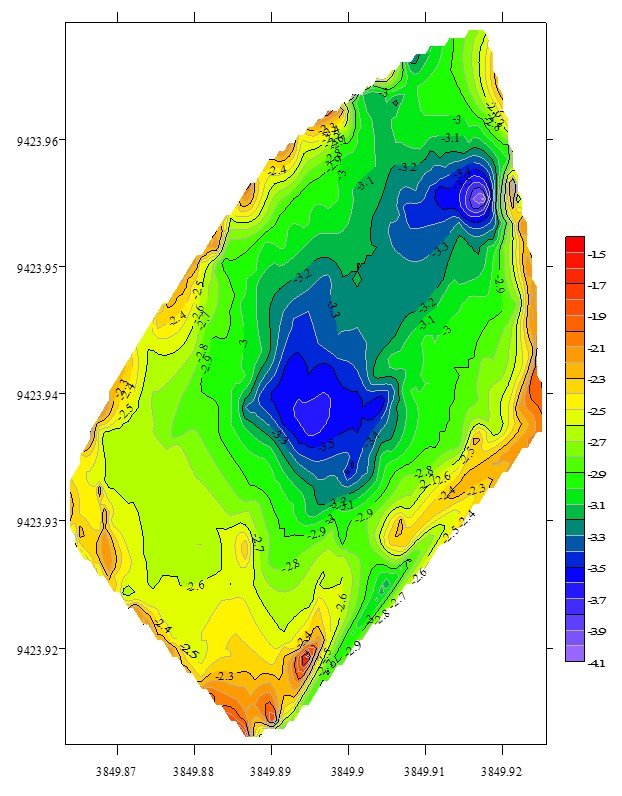 The photos below show the work done in 2017 by your Board to remove siltation and restore the banks of our upper settling pond (above the main pond).  This was funded by an approved special assessment totaling approximately $27,000, or approximately $155 per homeowner. 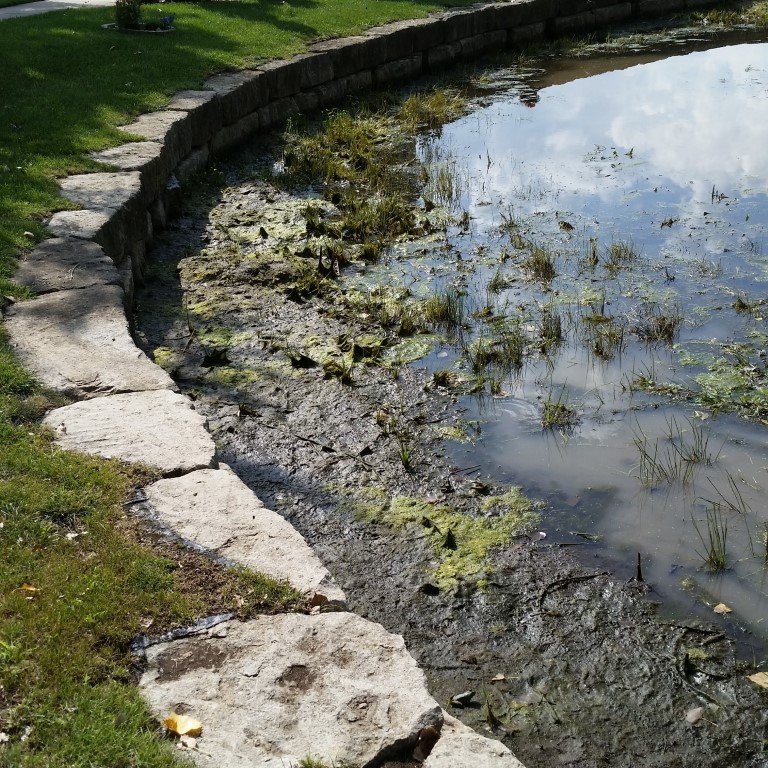 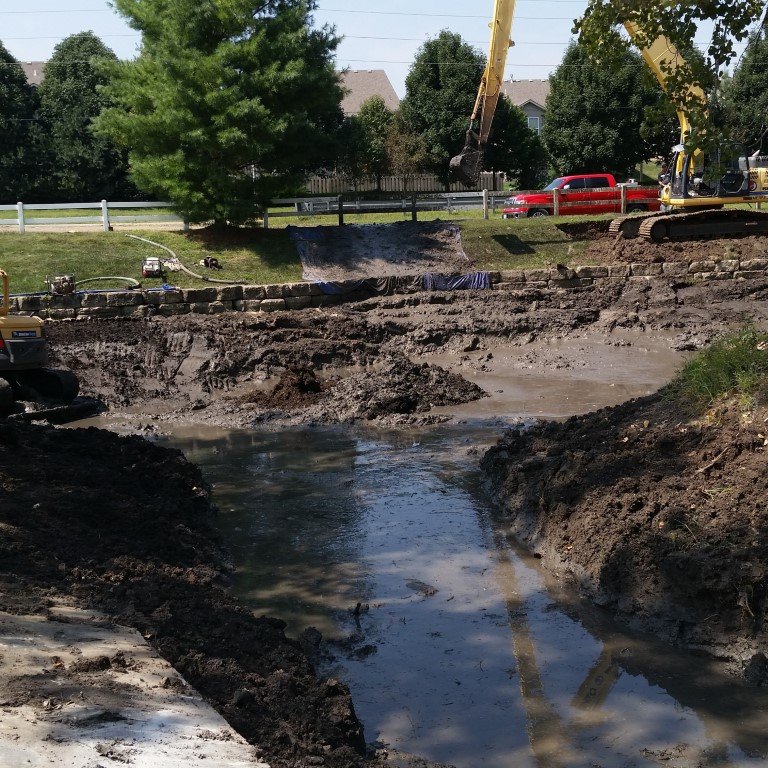 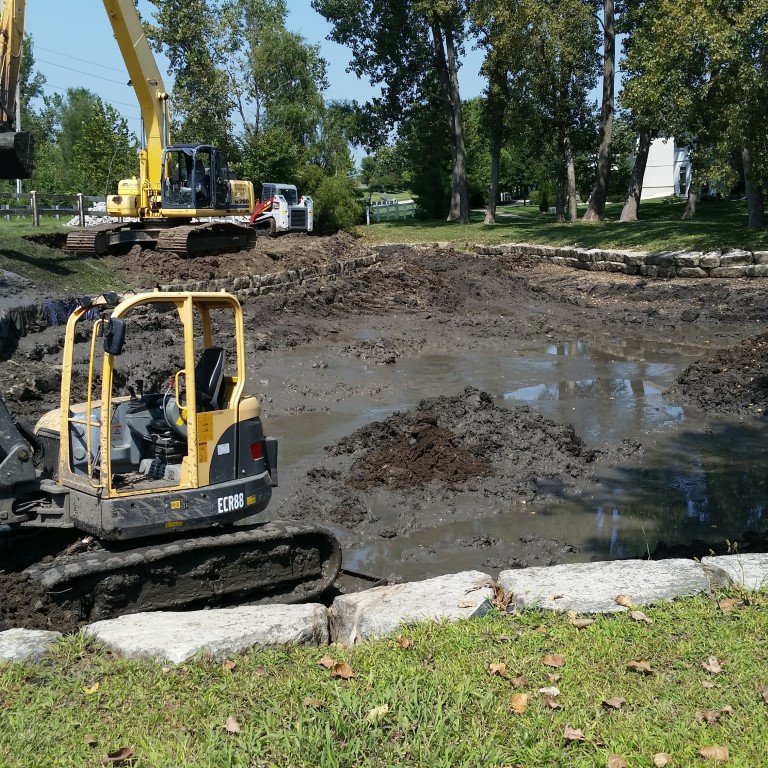 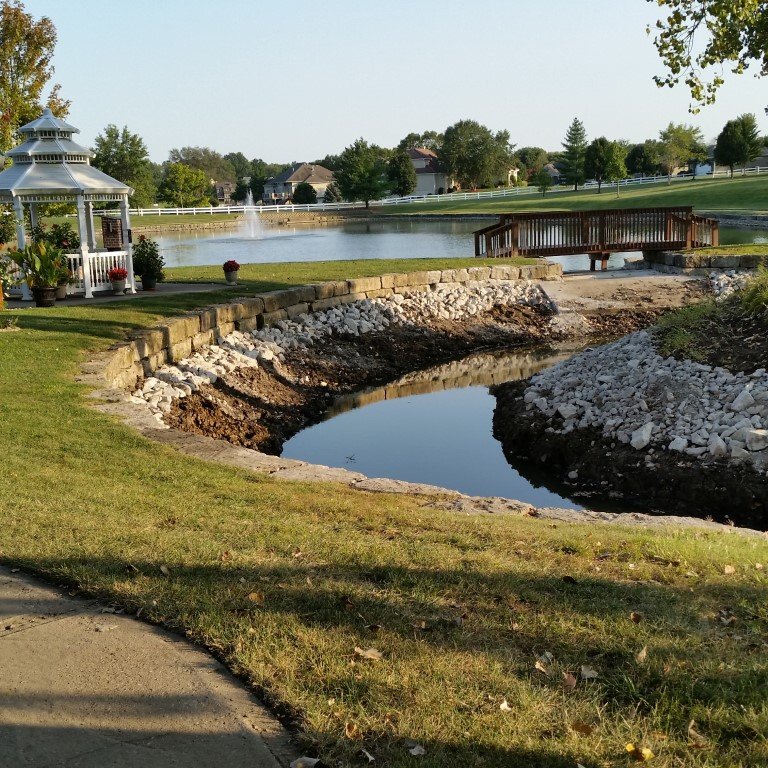 Assessments for Capital Projects are One-Time Costs per Household.

Homeowners rejected the Board’s recommended $24.87 per month dues catch-up proposal last Fall that would have funded all repairs.

VOLUNTEERS NEEDED
Ready for spring? With spring comes weed cleanup at the pond island.
If you are available Thursday, March 5 at 9:00 am, please meet your neighbors and help with the cleanup for an hour or two.
If you have clippers, lawn bags, rakes or a gas weed eater to bring, it would be helpful, but not necessary.
Hope to see you at the pond.
Thanks as always for your consideration & help.
Call Toni if you have any questions 816-806-7036

There will be some electricians from Jackson County Electrical Services working in the area starting on December 6th (date could change based on weather conditions). They will be working to correct some unsafe conditions so don’t be alarmed when you see them.

There will also be some Evergy (formerly KCP&L) personnel working with them the first day or two. Please avoid any areas where you see these folks working so that they can safely do their jobs without having to look out for any of us in their work areas. The electricians will be working on just about every electrical junction box in the area at some time during this repair.

FOUNTAINS Grounds Committee & HOA Board are requesting some Fountains residents to join a committee to explore financial possibilities to maintain the various projects on the common grounds that are necessary now and in the future. These are projects that were discussed at the Informational Meeting such as: Walking paths repairs, Roundabout fountain, Pond fountain, Pond bridge, Gazebos, over 600 trees plus all the other things mentioned. Check the link for all items discussed.

The upkeep of Fountains common grounds is very important to all residents as it affects our property values. Please consider joining this financial funding committee. If you are willing to help on this very important committee, please give your name and contact information to Sandy at Area Real Estate.

The fountain in the pond, located along Raintree Drive is out of order. The motor needs to be replaced and since the unit is approximately 13 years old, options are being researched before action is taken.

Thank you for your patience. 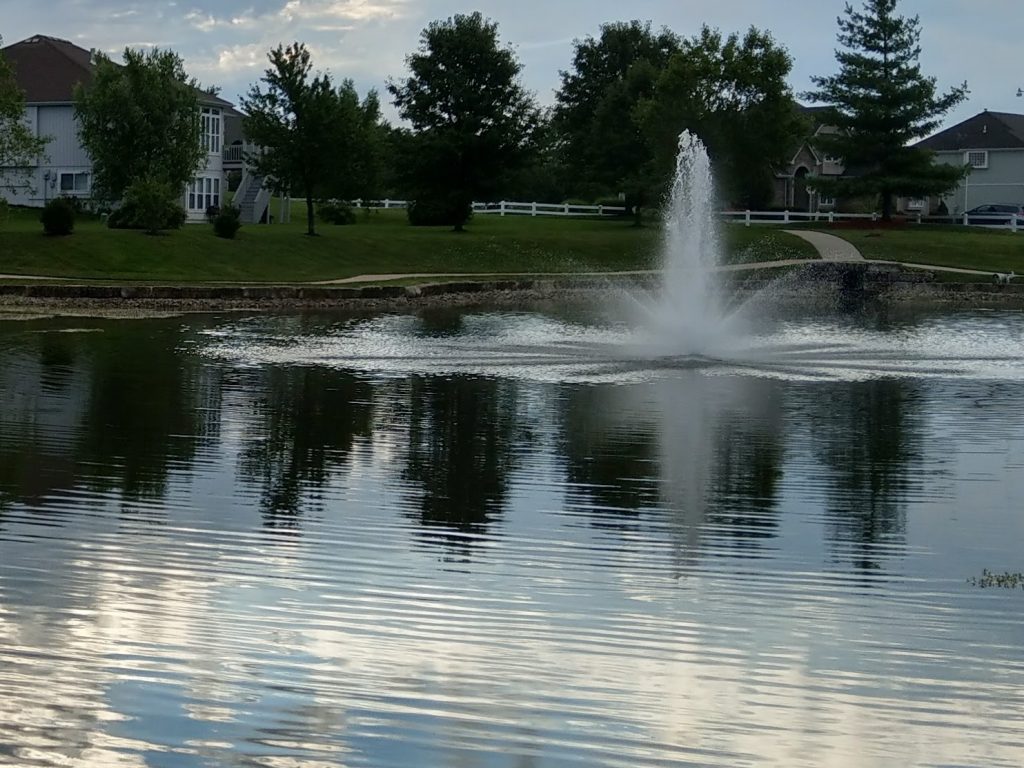 You are encouraged to attend the Fountains Informational Meeting on Thursday, April 4th at the Raintree Clubhouse at 7pm.

Fountains has several infrastructure items on common grounds to be maintained. Find out what is involved to keep the Fountains a premier area in Lee’s Summit. The status of the common grounds will be presented.

An outline of the topics is posted on our website at the link below:
https://www.fountainsatraintree.net/news/fountains-informational-meeting-april-4-outline/

Please print a copy and bring to the meeting to take notes.
Come on April 4th and be an informed resident.

We are having inquiries on the two emails sent out today. The informational meeting on April 4 for Fountains projects will NOT BE FUNDED by the special assessment from Raintree Lake Property Owners.
The special assessment from RLPOA is for the following items, ALL outside of the Fountains subdivision:
1.   Additional walking trails
2.   Boat/trailer parking on Raintree Parkway across from boat ramp
3.   Splash Park located at Raintree View
4.   Restrooms and shelter at Raintree View
5.   Pavilion at the Clubhouse

You are encouraged to attend the Fountains Informational Meeting on Thursday, April 4th at the Raintree Clubhouse at 7 pm.

Fountains has several infrastructure items on common grounds to be maintained. Find out what is involved to keep the Fountains a premier area in Lee’s Summit. The status of the common grounds will be presented. An outline of the topics will be posted on our website. Please print a copy and bring to the meeting to take notes.

As soon as the outline is posted, another notice will be sent with the link.
Come on April 4th and be an informed resident.

Cartwright will dispose of them at no cost to the homeowner.  In other areas of the community, Cartwright has also offered to pick up and chip any downed limbs for our neighborhood as a whole, at no cost, if they are piled at corner intersections within the community.  This is really necessary for those in Cul-De-Sacs and this will make it easier to manage the pick-up.  Please try to have your branches and limbs to the corner intersections or along Raintree Dr. sidewalk by 12 pm on February 12th or sooner.

If you have trees damaged on your property, that need to be addressed, you may contact Cartwright directly at 816-965-6758 and make arrangements to have work done.  Be sure to mention that you reside in the Fountains.  Work on homeowner’s property would be at your expense.  Cartwright gives the residents of the Fountains a discount due to the contract we have with them.

If you have any questions regarding this information, please reply to Sandy Turner on this message, or 816-650-6718.

Many of the things we take for granted around the neighborhood get done because of a small group of volunteers. After the small pond was dredged, the weeds got out of control on the island. The deep water made getting to the island difficult

Today, members of our Common Ground committee tackled the cleanup of the island. They are planning wildflower planting in the Spring. 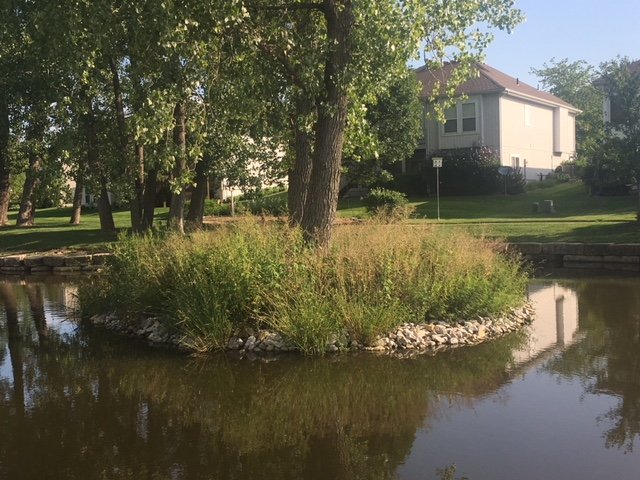 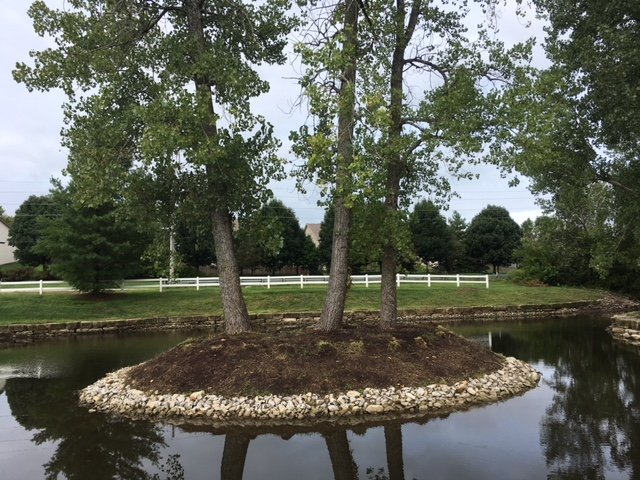 Cartwright Tree Care provides maintenance of over 500 trees in The Fountains. During their yearly inspection they found that the health of the row of trees on the common ground along Ward Road was suffering.  The trees were planted much too close together, and were strangling each other out.  The canopies of the the tress were expanding unevenly, weakening them and shortening their lives.  Cartwright recommended we thin the row and allow the existing trees to expand and fill in the gaps.  They believe that the remaining trees will flourish and fill the gaps within 2 years.

In addition, one of the giant old cottonwood trees near the small pond had been struck by lightning and was in danger of falling onto adjacent homes. Cartwright completed the removal, cleanup, and stump grinding of all of the trees on May 25, 2018.

The Fountains Board budgets funds annually for tree maintenance, and this work was done within the budget.  Several residents volunteered to remove and replace the fence rails adjacent to the tree line, saving significant time and money.

Cartwright has offered to work on trees on resident’s property at a reduced rate if the work is done when they are in the neighborhood. You can find their contact information on the  SERVICES -> TREE CARE page of this web site.  Remember that all maintenance on homeowner’s property is the homeowner’s responsibility. 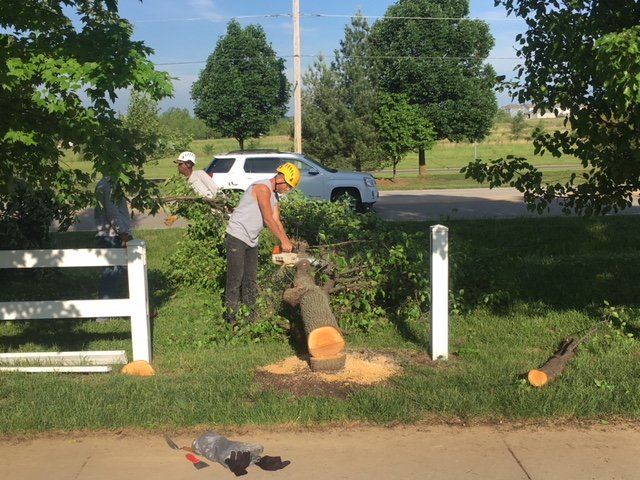